The legend lives on, from the Chippewa on down, of the big lake they call “Gitche Gumee”.

More on that topic in a moment.

We left our beloved site (7A) this morning, thanking Lady Proprietor for her hospitality. Next on the tour, we hoped, was this:

Instead, what we found was this. 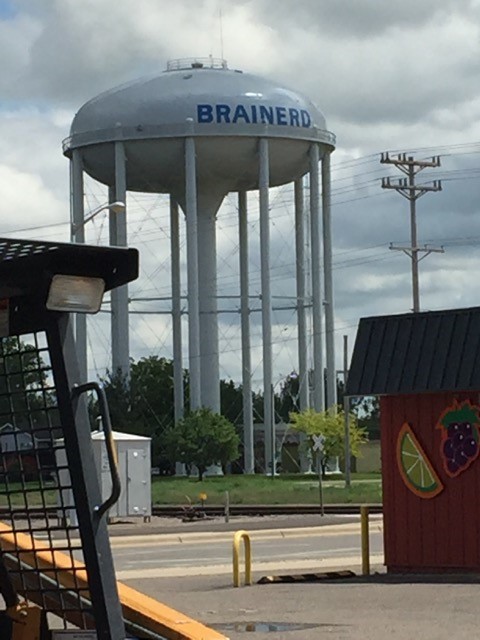 Turns out Brainerd let their replica go to North Carolina, and the ones left in Minnesota were in Bemidji … on the US-2 route we originally planned to take (the one crossed out below). 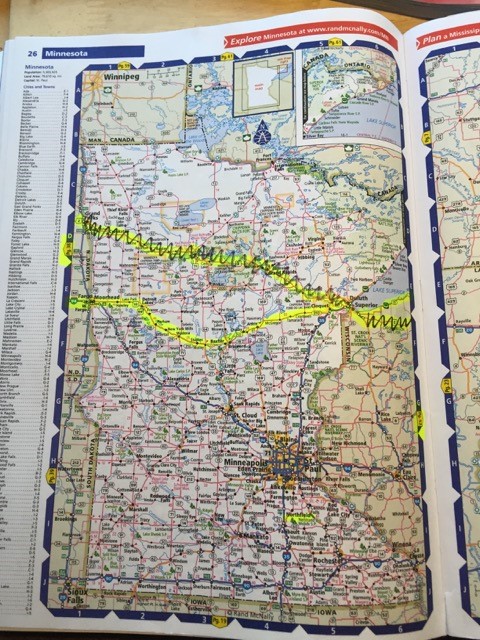 With our unfulfilled promise behind us, we motored toward Duluth/Superior … and if I may be so bold, State Highway 210 could not possibly be bumpier. Come on Minnesotans … if you can afford to adorn your highways with this …

… then you can certainly resurface State Highway 210. I guess that’s another reason we should have hooked back up with US-2 sooner.

Mom and Dad stopped just shy of Duluth. I took the opportunity to offer the local laridae a handful of nature’s nachos, but was quickly rebuffed.

I know, I look stunned, don’t you think? 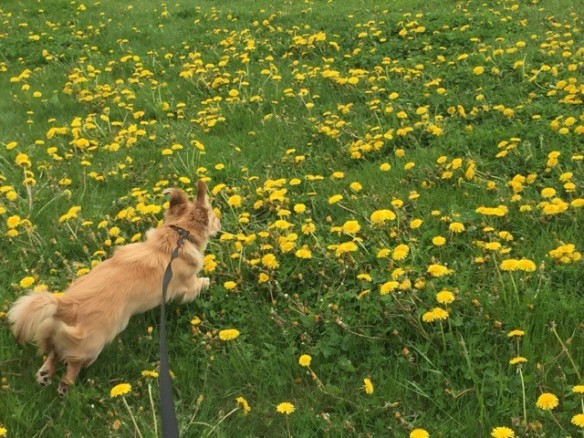 In the distance, we could see the big lake they call Gitche Gumee. 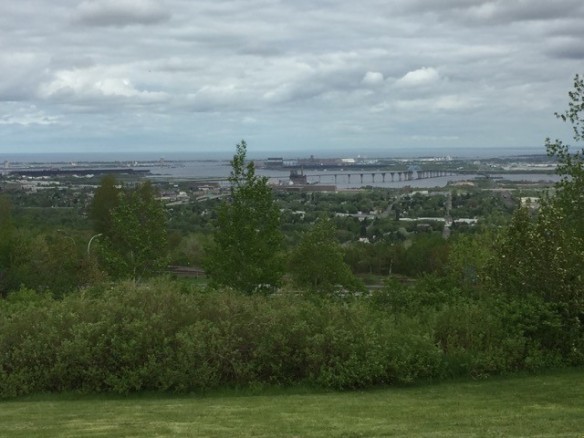 That’s Lake Superior, the Greatest of the Great Lakes. Somewhere at the bottom of this lake, you will find the Wreck of the Edmund Fitzgerald. So as we hopped on to US-2 (I know, isn’t it ironic, don’t you think) to cross over into Wisconsin, we couldn’t help but think of the famous ship wreck when we saw where iron ore was being loaded (26,000 tons more than the good ship and crew weighed empty in the fabled song). 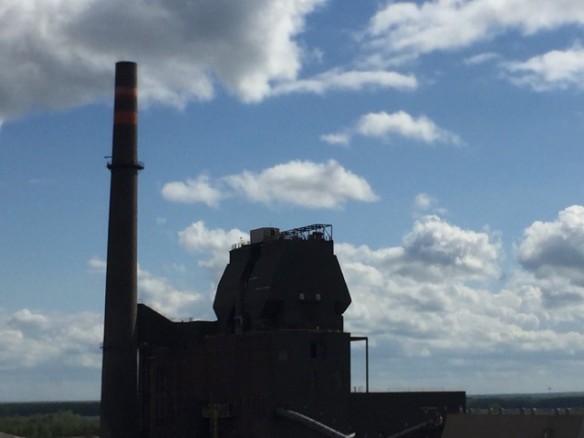 My view, from the floor of the RV, included the top of the bridge span.

But as we finished crossing the bridge, we celebrated arrival in our destination state … Wisconsin!! 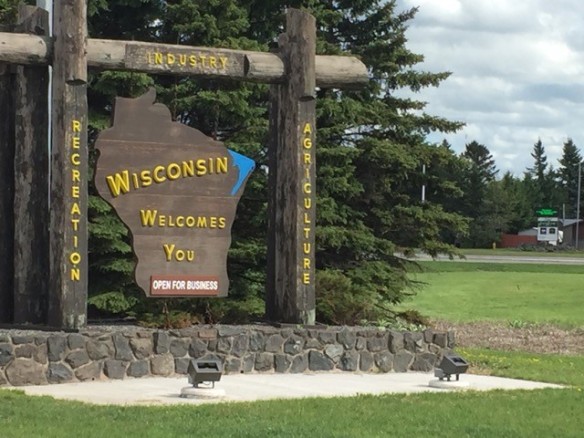 A full 2,000 miles from our home, we arrived at the Northwest-most corner of the state. Instead of heading south, we elected to swing north and take in some of the coast line on Wisconsin 13. You can see where Wisconsin 13 goes north of US-2 here:

But trees largely blocked the coast line, so we instead gazed upon this for thirty miles. 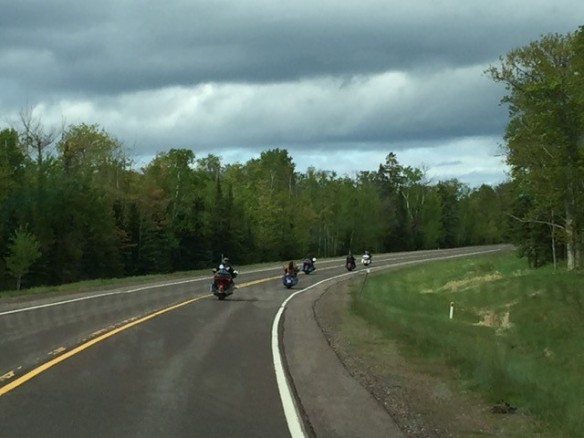 Speaking of freedom, unlike the Edmund Fitzgerald, the witch of November did not come stealin’. Instead, we found safe harbor just north of Bayfield. While I performed my duties, I saw Dad parking the rig, and decided that it was time for HAPPY HOUR!

The views of Gitche Gumee were beautiful. 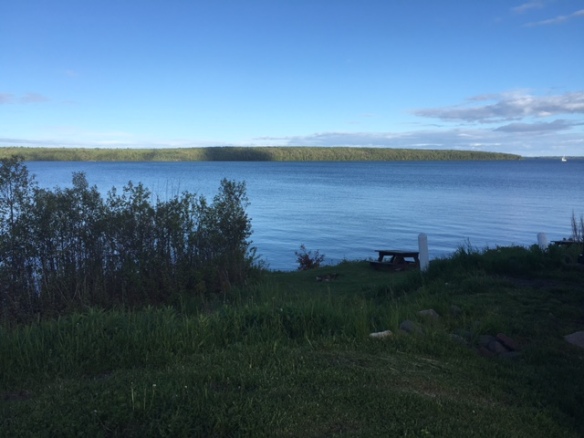 In the song, the old cook came on deck and said “fellas, it’s too rough to feed ya”. Not the case here. Dad enjoyed a full meal. Look at his salad … french dressing … #wontfindthatinthepacificnorthwest 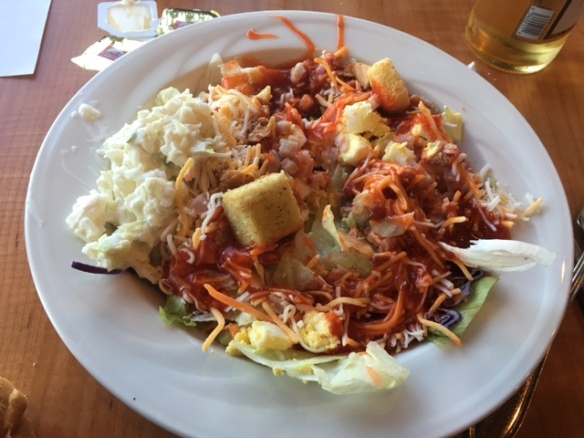 Let’s just say that if the RV goes down in a storm alongside Gitche Gumee, Dad will drown with a full stomach and happy thoughts.

I really dug the place (visit the website if you cannot see the video).

Superior, they said, never gives up her dead, when the gales of November come early. But when the mosquitoes of May come early, Superior welcomes all with open arms. On Wisconsin!