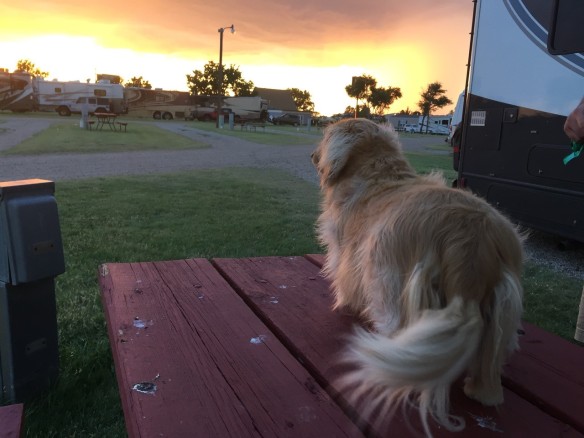 We’re in Western Kansas. A place where virtually nobody is … except us … and the RVers … and the truck drivers. All of us were treated to some “whoppers” today.

A line of storms (spanning Central Texas to Toronto in length) pummeled our route down US-81. 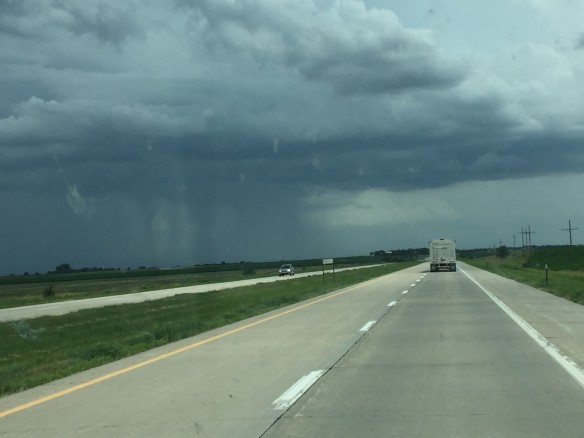 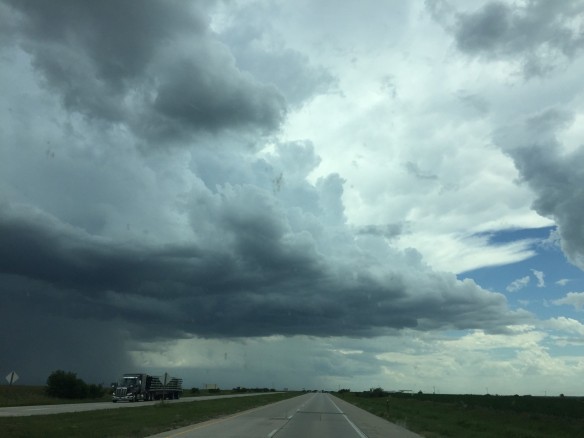 Not surprisingly, the storms cleaned up the windshield quite nicely.

But I’m speaking out of chronological order. And I shouldn’t do that, because this isn’t an episode of “Lost”, now is it?

Our day started in Eastern Nebraska. 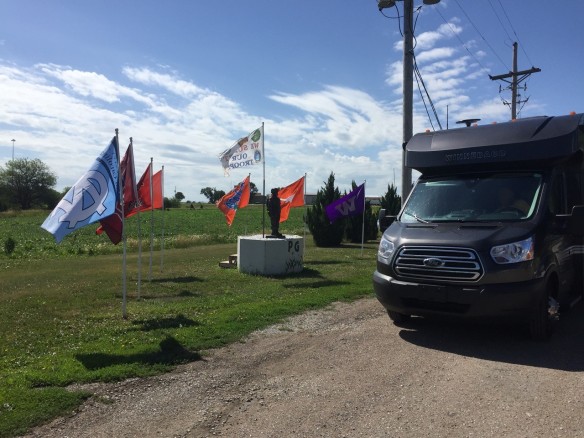 Those eight flags represented the eight teams who descended upon Omaha for the College World Series. Their campers populated area campgrounds, limiting reservation space in ways Western Kansas could only dream of. 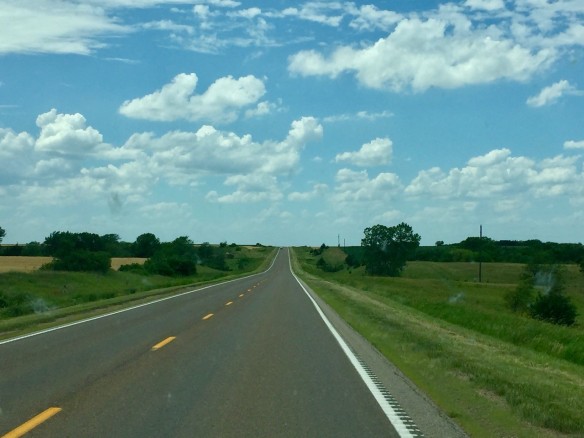 An hour later, we landed west of Beatrice, home of this … 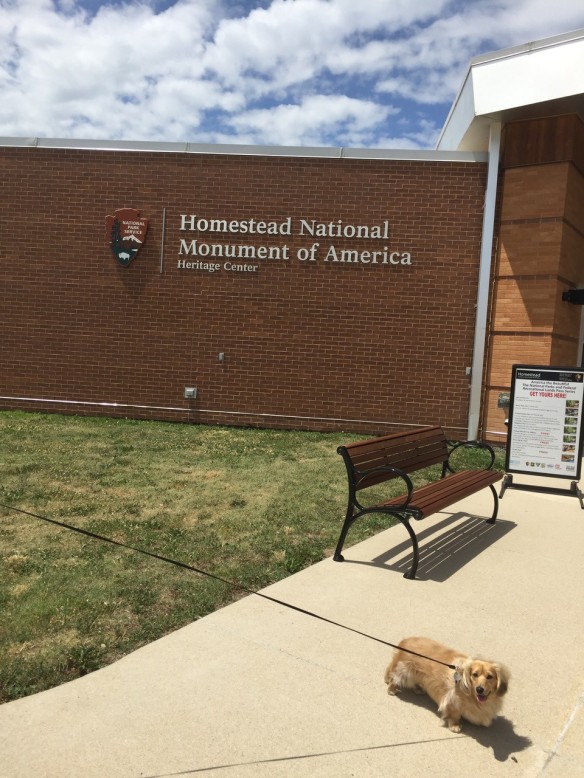 Of course, pups weren’t allowed inside … I had to stand outside in sweltering 90 degree heat and 72 degree dew points while Mom and Dad alternated visits inside. Still, it’s better than being separated from both parents, #amirite?

At one point, Mom showed me what one of the homestead homes might have looked like. Pretty comfy quarters. 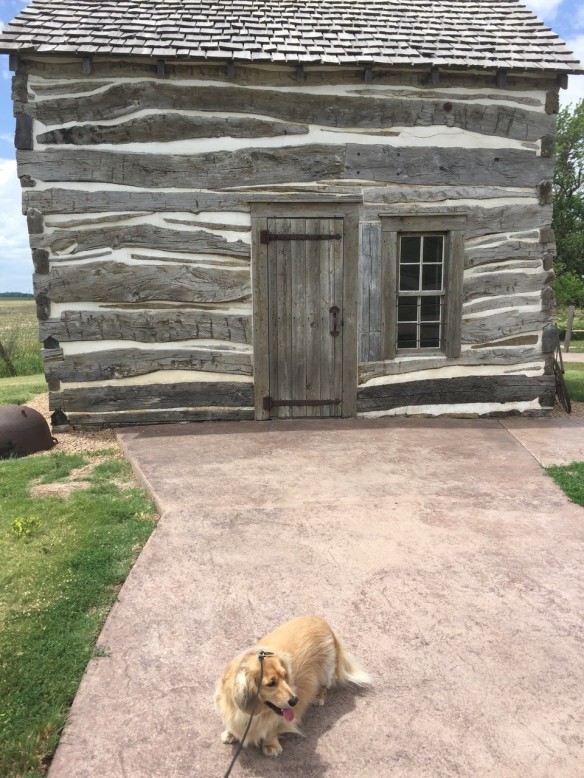 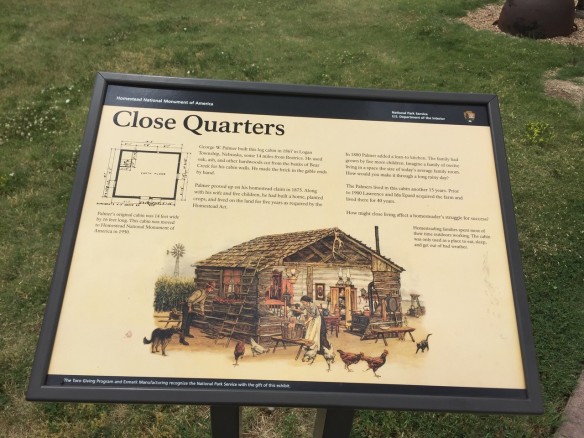 The Homestead Act opened up the West to millions of aspiring pioneers. Somewhere around 40% succeeded in establishing a homestead. Those are better odds than the Phoenix Suns winning a basketball game.

Of course, folks were kicked out … gains for some result in losses for others. 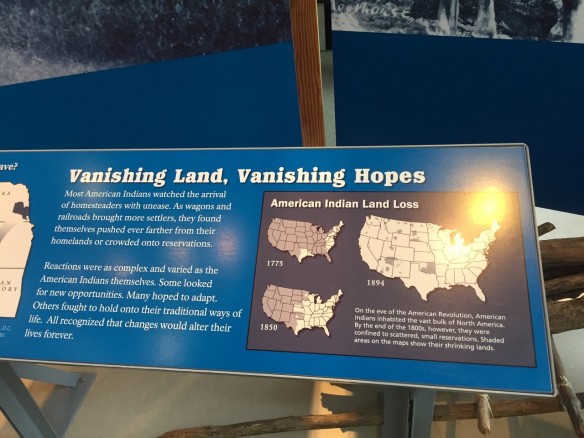 I’ll tell you this much … if somebody decided to take my RV and claim it as their own homestead, they would be a lot of growling, especially if the interloper took my crunchables!

Mom finished off the tour with a quilt exhibition (of all things) at the National Monument. 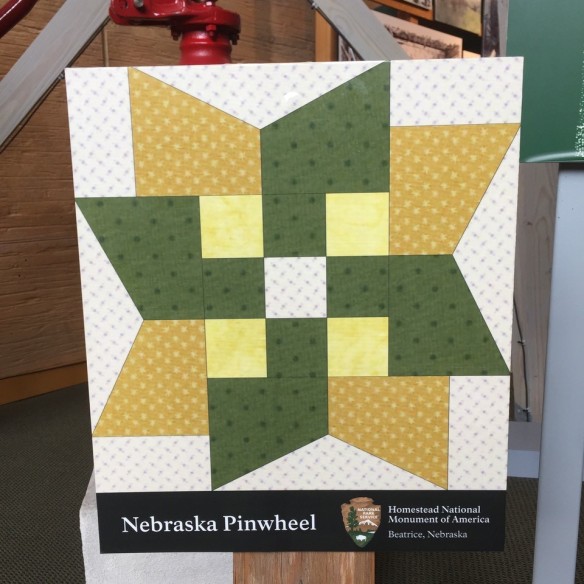 Next, we headed to Kansas. 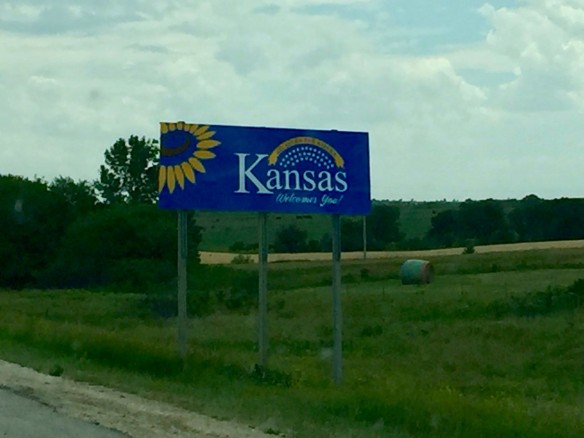 Kansas might be known as the sunflower state … but it could also be known as New Orleans North. 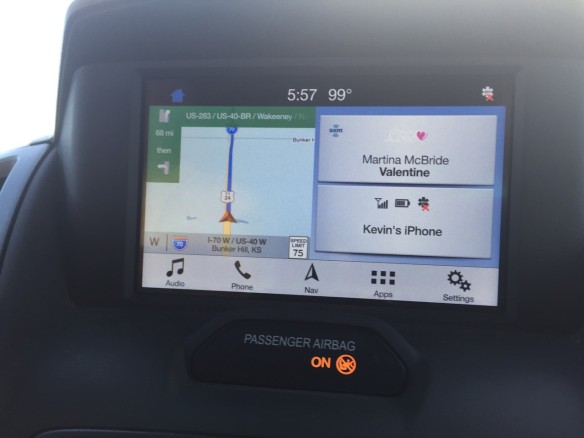 Oh, did I tell you that Dad tried to fix his tire problem? He visited a handful of Ford Dealerships looking for lug nuts, only to drive a few hours out-of-the-way to Salina where he was promised that Ford had lug nuts … only to learn that all his lug nuts were intact and a faux lug on the outside of the decorative wheel cover was missing. Three years were shaved off of his life … for nothing. Nothing but a lot of grumpy energy expended over three days. Thanks, Dad.

From Salina, we drove west and found our campground. I wasn’t prepared for the quiz offered by the campground. 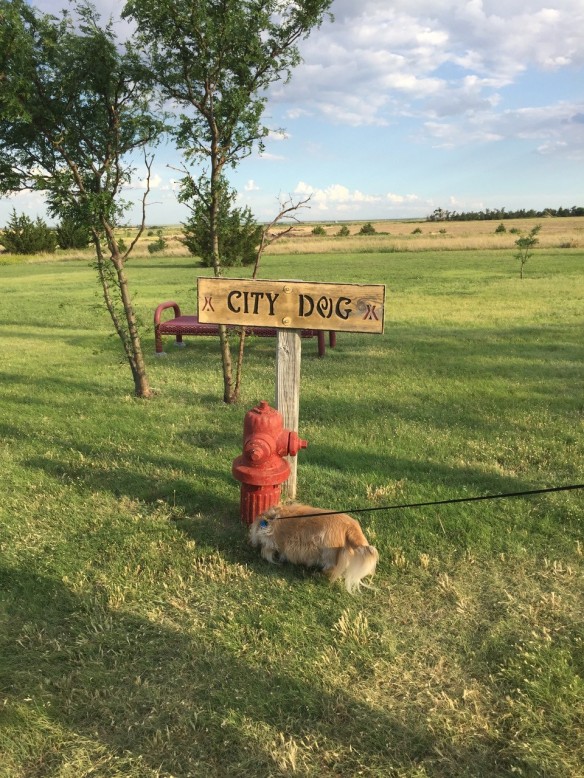 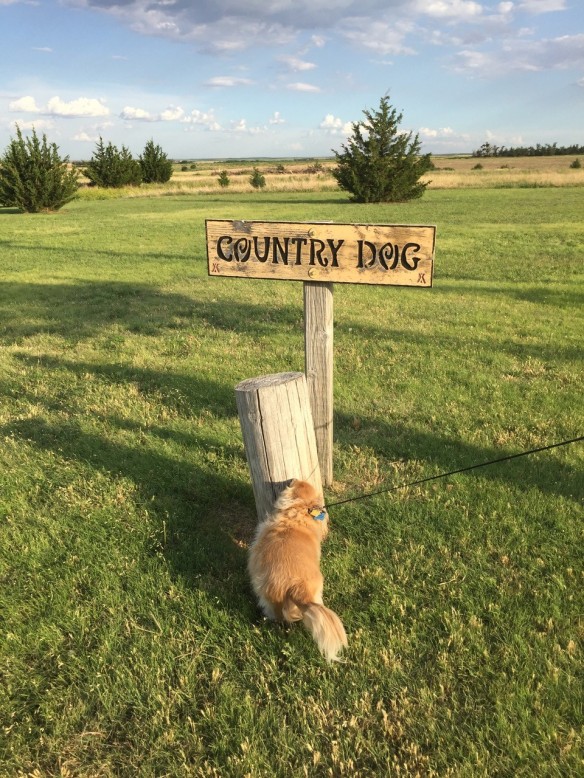 I couldn’t find the “Exurban Dog” sign that aptly describes my lot in life. Oh well. 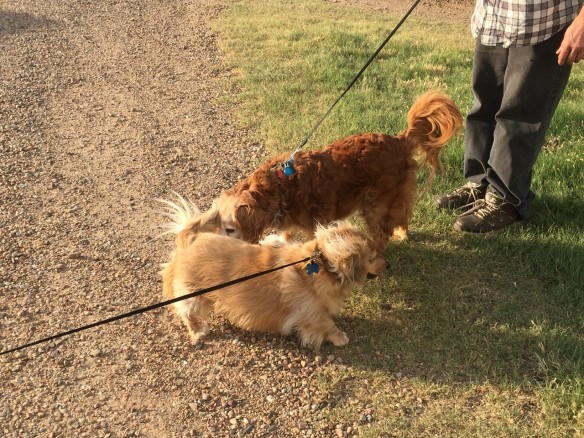 … and touring the facilities … 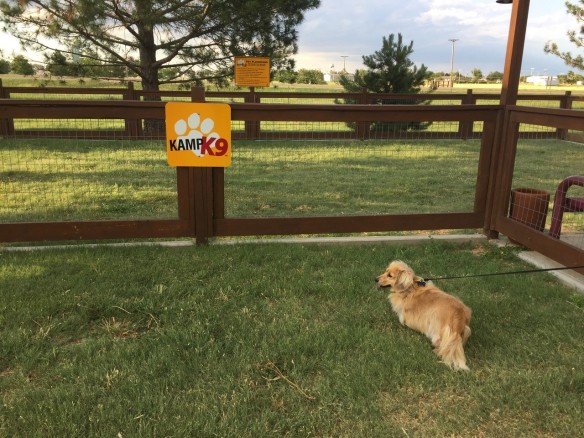 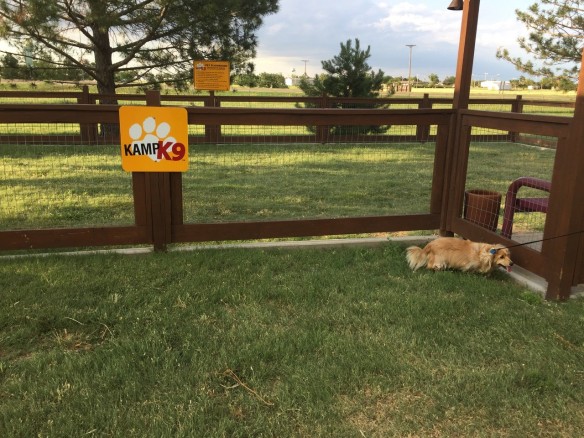 … Mom and Dad ditched me for dinner … they visited this outstanding establishment a few blocks away.

After an onion ring tour and a pork schnitzel sammie, Dad returned to the rig where I terrorized Dad and Mom for an hour, behaving poorly. That’s when Dad laid down the law … he brought the thunder down with him, in the only way that is known to subdue me.

He used this hand motion. 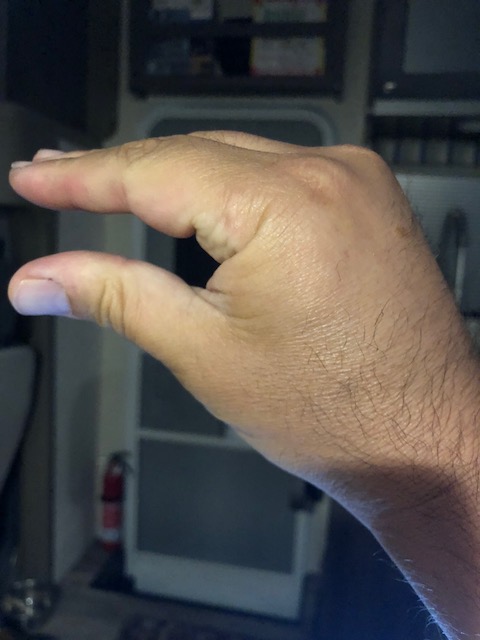 When he point his hand in that specific motion directly at me and stares at me and doesn’t break the stare until I break it first, the game is over, the jig is up. I submit. 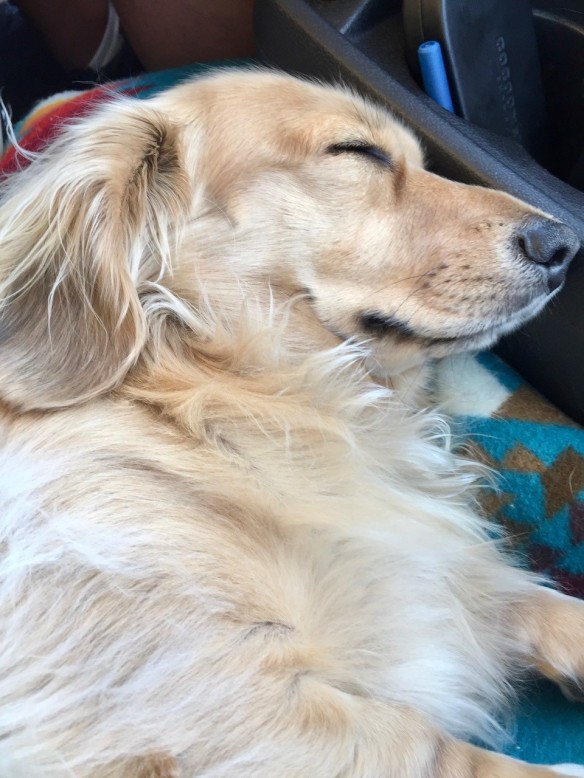 And to be honest, it’s better to submit, to put yourself in a Sunflower State of Mind. Being grumpy is hard work, just ask Dad!

6 thoughts on “Sunflower State of Mind”