Today’s story was told via the clouds. 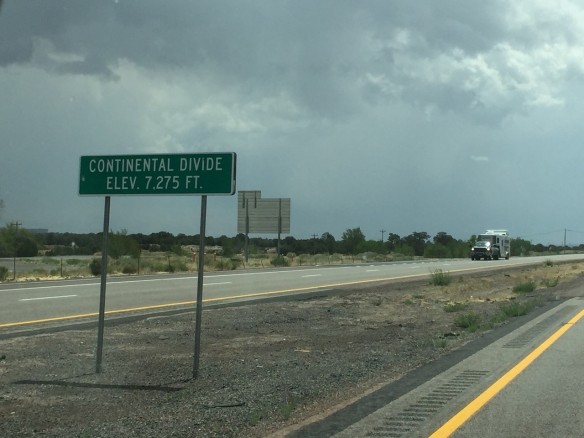 We cross the Continental Divide, and you’d think it would all be downhill from here. But look up – you see storm clouds brewing. It didn’t take long for those clouds to get busy dampening the mood.

We had only one choice … we put the petal to the metal and we outran the storm! We outran it all the way to this destination.

Did you see my face? That’s the face of a pup who checked the National Weather Service website, and noticed that the storms were not only making up ground on us (due to our stationary positioning), but they had become SEVERE!

Dad suggested that we try to take a hike before the storm hit. Mom had that level of skepticism that only I get to see … at one point opining that she didn’t want to win a “Darwin Award” on our forthcoming hike.

So we tried to hike a bit, trying to find petroglyphs like this one.

The walk was scheduled for two miles, round-trip. We tried, we really tried to get serious about the hike. But tell me what you see behind the RV?

We took the dune-laden trail about 0.2 miles before Mom spotted a bolt of white-hot lightning on the horizon. Dad counted fifteen seconds, and told me that meant the storm was maybe three miles away. 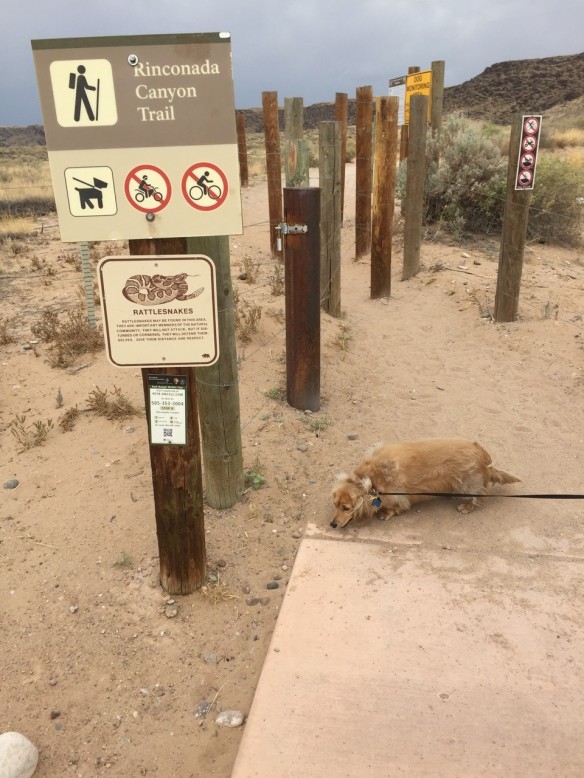 Back to the RV we ran … this time, we hopped in and tried to again outrun the storm by driving northeast to Santa Fe.

What do you think happened by the time we got there?

Yup – we couldn’t avoid the puddles.

So Dad says “the heck with the day, we’re going shopping at Whole Foods”. And that’s exactly what we did.

A day of planned adventure became a day of running to the front door at Whole Foods to see how many Kindle devices Amazon could pack into the entryway of Whole Foods (hint, the answer is 37 … ok, I have no idea what the real number is. It was more than two).

Mom loaded the fridge with paycheck-busting goodness, and we called it a night, huddled in our RV while breezy 52 degree thundershowers passed overhead. The locals tell us this is the first time it rained in Santa Fe in eight weeks. Good for us!

Tomorrow’s forecast suggests that we’ll be thunderstruck again, as storms follow us into West Texas. Mom offered a paradigm-busting plan … TRULY OUTRUN the storms and head much farther east than originally planned.